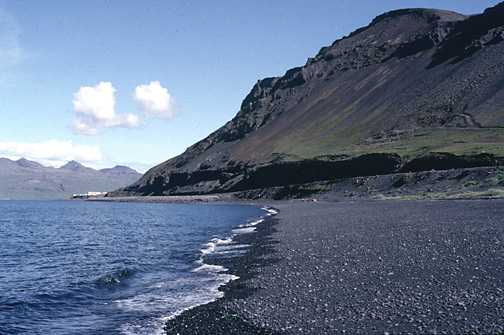 Ólafsvík Headland, looking east. The town of Ólafsvík is visible just beyond the headland. Ebenezer Henderson, who passed this way on 27 May 1815, describes leaving Ingjaldshóll in the morning and riding east along the coast toward Ólafsvík:

The road was at first rather boggy, but we soon gained the sand which forms the beach, and advanced with considerable speed till we reached the base of a huge projecting mountain called Ennit [i.e., "The Headland"], where we were obliged to alight, and suffer our horses to find the road as well as they could, across the large stones that have been dislodged on the beach.

The pass at this place is justly considered to be one of the most dangerous in Iceland. The mountain is about 2500 feet in height, presenting the most rugged and frightful appearance imaginable in front, and seems to be extremely irregular in its formation. . . . The sea having eat[en] away a considerable part of its base, numerous holes and caverns present themselves; and its sides being perpendicular, there is no possibility of passing it except at low water, and even then the sea only recedes to a short distance; so that though the traveller keeps close to the water, he still runs great risk of being crushed to atoms by the stones falling from the mountain. Numbers have actually lost their lives here; and many of the natives prefer a long circuitous route along the south side of the peninsula to this short but difficult pass. It was not without impressions of terror that I ventured below the beetling cliffs, many of which appeared to be almost entirely disengaged from the mountain; and my anxiety was greatly increased on witnessing the stones that had tumbled down during the ebb. (IJR323-4)