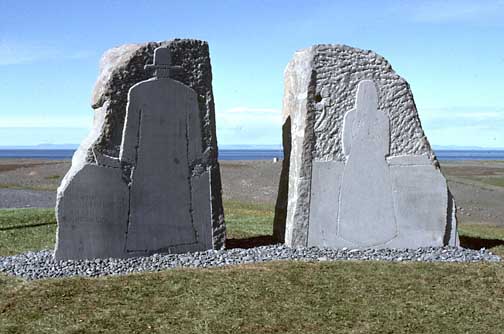 Eggert Ólafsson and his wife Ingibjörg Guðmundsdóttir: a memorial at Ingjaldshóll on the north coast of the Snæfell Peninsula. Ingibjörg was born and raised at Ingjaldshóll and she and Eggert met when he was studying there as a young man.

On the monument Eggert and Ingibjörg are viewed from behind, staring across Breiðafjörður toward Skor, the starting point of their fatal voyage. The monument (by the sculptor Páll Guðmundsson á Húsafelli) was dedicated in 1998.