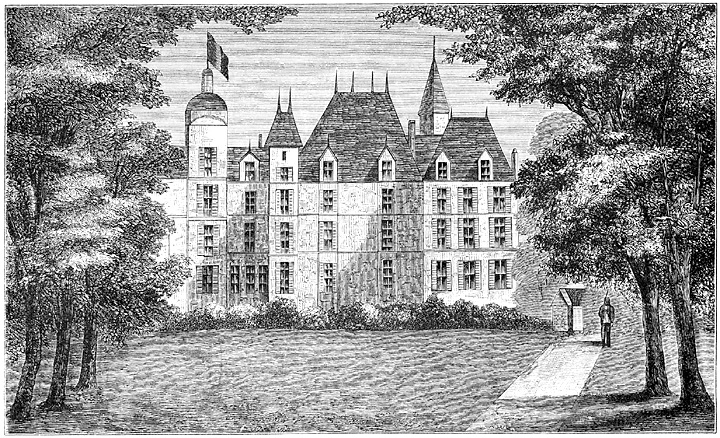 The Château d'Eu. The illustration is based on a sketch by Georgiana Bloomfield, one of the queen's maids of honor, who accompanied the royal party to France. In her memoirs she describes their reception:

As soon as the royal yacht approached, the King, Louis Philippe, accompanied by the Duc d'Aumale and the Duc de Montpensier, Lord Cowley, and several of the suite put off in the royal barge, and immediately came on board the yacht. The King embraced the Queen on both cheeks, and then kissed Her Majesty's hand, and welcomed her most heartily to the shores of France. The first time an English sovereign had visited France since the Field of the Cloth of Gold. At first the King seemed quite overcome; but he soon recovered himself, and spoke to us all in excellent English. He is very like the impression on the French coins — stout, with a good countenance; his hair, which is thick and grizzly, brushed up in a point, and his complexion florid.