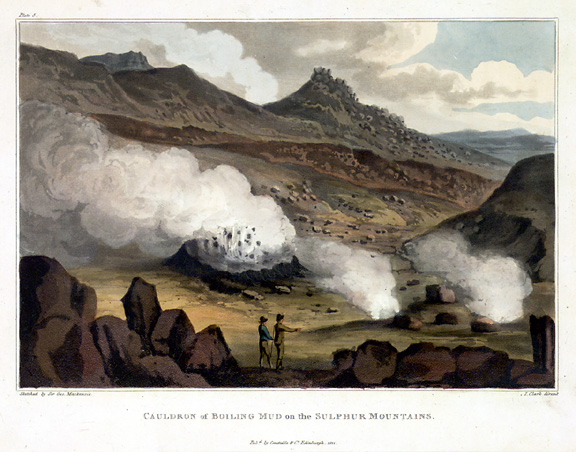 In his journal, Henry Holland, who accompanied Mackenzie to Iceland, describes the mudpot depicted in this hand-colored engraving as

a vast cauldron, full of a thick turbid fluid, which is thrown into violent agitation and occasionally forced to a considerable height, by the rapid rising of a dense column of steam from beneath. By the continuance of this action, a wall, 2 or 3 feet in height, and composed of the same kind of clay, which is held in suspension in the water, has been formed around the bason. Owing to this circumstance, and to the nature of the surrounding surface, which is composed of the same clay and sulphur, and is so soft as not to bear the pressure of the foot, we were unable to approach nearer to the bason than within 3 or 4 yards. As accurately as we could judge at that distance, it is about 15 feet in diameter; no water appears to issue from it, the wall or rim being perfect all round. The smell of the vapour issuing through the fluid is strongly sulphureous. Its quantity and force of emission are not constant, but vary considerably — not, however, at any regular intervals of time. Another circumstance preventing our close approach to the bason, and rendering it difficult to walk even at some distance, was the heat of the surface, and the quantity of sulphureous vapour issuing forth from numerous crevices in the beds of sulphur and clay. (Henry Holland, "Journal of a Voyage etc. to Iceland in the Summer of 1810," I [Lbs. 3875 4to], 57.)