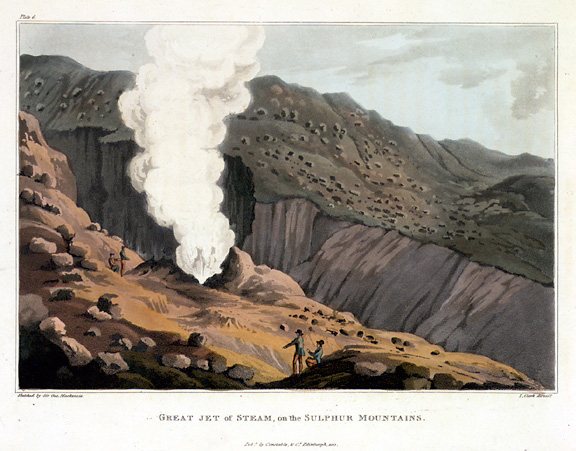 Mackenzie describes as follows the scene illustrated in this hand-colored engraving:

A dense column of steam, mixed with a little water, was forcing its way impetuously through a crevice in the rock, at the head of a narrow valley, or break in the mountain. The violence with which it rushes out is so great, that the noises, thus occasioned, may often be heard at the distance of several miles, and during the night, while lying in our tent at Krisuvik, we more than once listened to them with mingled awe and astonishment. Behind the column of vapour was a dark coloured rock, which gave it its full effect.

It is quite beyond my power to offer such a description of this extraordinary place, as to convey adequate ideas of its wonders, or its terrors. The sensations of a person, even of firm nerves, standing on a support which feebly sustains him, over an abyss where, literally, fire and brimstone are in dreadful and incessant action; having before his eyes tremendous proofs of what is going on beneath him; enveloped in thick vapours; his ears stunned with thundering noises; these can hardly be expressed in words, and can only be well conceived by those who have experienced them. (TII118-9)