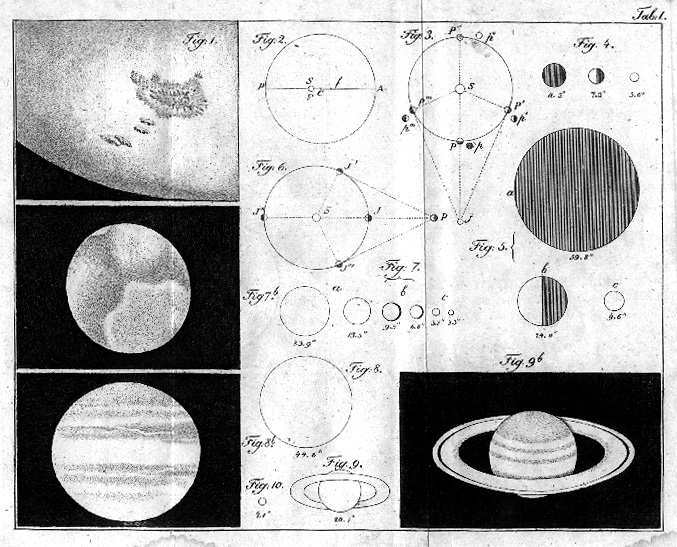 The solar system. Table I of Ursin's Popular Introduction to Astronomy. Figure 1 depicts sunspots (sóldeplar). "If we look at the sun though darkened glass," Jónas writes, "we can often see with the naked eye — and see still better with a telescope — remarkable spots in the sun. They are sometimes so big that their diameter is five or six times that of the earth, so it is evident that whatever these spots may be — whether elevations or depressions — they are many times larger than our planet. They are usually very dark, surrounded by a brighter rim of shadow. An image of several such sunspots can be seen in [Figure 1, as observed by the] astronomer Pastorff on 2 October 1825 (3E321)."

Figure 7b depicts the planet Mars as observed by Sir William Herschel on 16 August 1830.

Figure 8b depicts Jupiter as observed by Herschel on 23 September 1832. "The bands across its surface have been interpreted as the shadows of mountain ranges. It is likelier, however, that there are brisk tradewinds on Jupiter, even stronger and steadier than those on earth, which roil the atmosphere around the middle of the planet, enabling us to glimpse the dark surface of the ground beneath (3E342)."

Figure 9b is Saturn as depicted by Herschel. "Dark stripes, like those on Jupiter, can be seen around its middle. But it is especially the engirdling ring that makes Saturn unique and remarkable (ibid.)."