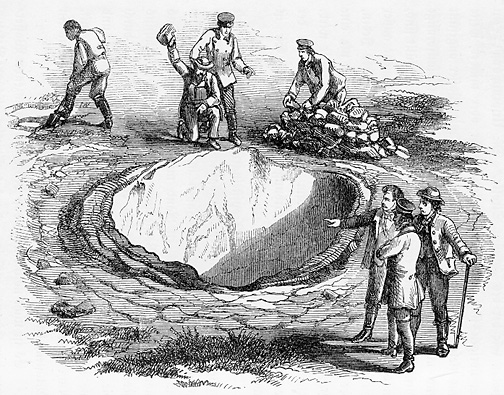 Strokkur. How not to treat a geyser. Jónas wrote after his visit in 1837:

I knew that one can prod Strokkur into erupting by throwing rocks down its vent, but this is highly irresponsible behavior and I did not wish to have it on my conscience. I preferred to wait, contenting myself in the meantime with studying this remarkable hot spring, whose enormous power considerably surpasses that of Geysir, if one takes their relative sizes into account.

Strokkur lies south of Geysir, some hundred yards away. It is surrounded by a low mound of silica crust of the same color and character as that of Geysir. The elevated rim around the spring's vent, described by earlier travellers, has now almost completely disappeared: foreign visitors have amused themselves by breaking it up and shoving chunks into the vent in order to hurry along an eruption. And this vandalism has gone so far that one of these Milord Travellers (an English baronet, they say) even succeeded — after vast exertions, and surely not without risk — in prying loose a big piece of the inner wall of the vent itself, as a consequence of which a large cavity was formed which has had a disastrous effect on the shape of the erupting column of water.1 Undaunted by this, Strokkur has been laboring steadily for the past eight years to repair the damage, and has been to some degree successful. (3D46-8)

1 Mr. W. . . .was undoubtedly hoping to produce a spectacular eruption, but he went too far, and failed utterly of his purpose. The farmer at Laugar, who had allowed himself to be roped into helping the Englishman with his preparations, told me that His Lordship had had a perfectly ridiculous quantity of rocks and chunks of earth thrown into the vent of the geyser — but they failed of their expected effect. Strokkur continued to steam quietly away and Mr. W. . . . had to leave the place without getting to see a single eruption.

After he was gone, three weeks passed without Strokkur gushing even once. Everyone thought the spring was permanently clogged and people at the farm were afraid it might break forth somewhere else and cause damage. Finally, one morning, the geyser cleared its throat, and they say it was a terrific eruption. The ground shook far and wide when Strokkur — bursting with fury — vomited the Englishman's rocks high up into the air. At first most of them fell down again into the vent. But Strokkur was back in business, now, and did not stop gushing until everything that had been thrown into it was either ejected or pulverized to gravel. This outburst went on until almost noon.

People say, however, that Strokkur no longer hurls its water to as great a height as it once did, and this is confirmed by looking at the accounts of earlier travellers. It seems reasonable to blame this development on the mistreatment the spring has received from the irresponsible behavior of the Englishman and other visitors.