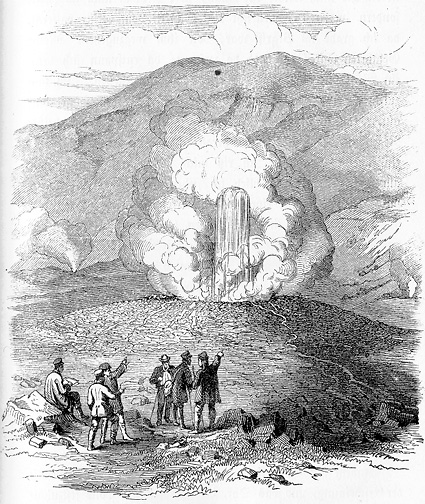 Geysir. Beginning of an eruption. This woodcut, like the two that follow, was prepared from a sketch by Gustav Georg Winkler (1820-1896), a Munich geologist and mineralogist who visited Iceland in the summer of 1858.

During his own visit two decades earlier, Jónas's experience with Geysir had been disappointing. After watching a spectacular eruption of Strokkur, he had gone back to the nearby farm Laugar to collect some equipment. While he was doing this, one of the girls on the farm came to him and said "'the spring is just about to start cleansing itself' (hverinn ætlar að fara að hreinsa sig)."

She had gone out to look after the livestock and drive it off to a safe distance.1 I knew right away that she must be talking about Geysir. There was not a moment to lose. I began running as fast as my feet would carry me — but I was too late anyway. I was a good quarter of a mile away when the eruption began and I reached the geyser only when it was coming to an end. I had stopped involuntarily several times en route, since it was not possible — at one and the same moment — to run and to observe the phenomenon as attentively as I wanted to.

It was definitely a second-rate eruption. When it was over the geyser's basin was not even completely empty. Even so, I was astonished by the sheer volume of water. True, the jet rose no higher than Strokkur's during its most recent, spectacular eruption — but it was more than three times as thick. (The greater part of this water, in falling, came down outside the rim of the basin, where it collected in the considerable channel that has gradually formed to drain it away. Quite a little river was flowing there, which I would not have wanted to wade across even if it had been cool!)

The worst thing was that I did not manage to observe the eruption closely enough to be able to describe accurately or precisely the character of its column of water, partly because it was so far away from me (especially at the beginning), but also — and this was the main difficulty — because a breeze from the north was blowing clouds of steam in the direction from which I was running. (3D51-2)

1 Only a few days earlier a sheep had been killed right next to Geysir. It had not had time to get clear. [Jónas's note]